Gun control has long been debated in our nation by both citizens and politicians alike. We live in a time where violence has been on the rise in our major cities and gun related crimes have risen with this statistic. There is a severe lack of government funding directed to curbing the foundation and source of the increase of violent gun related crime. We do not have an appropriate amount of funding for combating organized crime, gun smuggling or mental health among the general population. So with the 2019 election having been just announced last week, where do the parties of Canada stand on gun related issues? In this series over the next four weeks, we will be investigating the gun control stances of each of the major parties of this great nation. Today, we start with the Liberal Party of Canada.

I was trying to copy the link to the page that they had posted with the preceding points, and it has now been replaced with a general platform outline, which, shockingly (not really), does not mention their current, up-to-date stance on firearms. Page 54 of the document is where you’ll find the outline of points above. 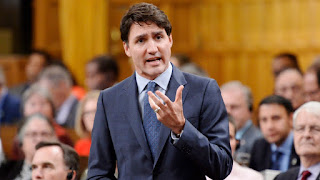 So lets have a look at the points on their agenda. Of those promises, what have they actually done?

With point number one, they did manage to include an amendment to bill C-42 that allows requires an ATT for transport of a restricted or prohibited firearms. Other items of removing the government from making decisions on classification was not achieved and the Governor in Council is responsible for prescribing classification of firearms. Reference can be found here. There was also a reference page found with a detailed outline of the debate in the House and you can read the statements of each Member here.

Point two fell short of its target. It provided a promise of $100 million dollars per year, equal to $400 million over the four year term of the party, for illegal gun and gang related crime. According to this article written by the CBC, it was only able to commit to a total of $327 million total to fight gangs, illegal guns, border security and smuggling and some of the funds to RCMP for investigations, training, inspections, technology and intelligence. So not only did they fall short on their financial target, they spread the money around to other agency’s instead of investing the promised $400 million to illegal gun and gang activity. That problem only ended up with $200 million spread across each province to be allocated as they saw fit. That was only 50% of the Liberals intended target in 2015.

Point three was held up and accomplished by the Liberals as promised. You can find the Committee members and their bios here. However, the committee falls short in its representation by gun rights activists. This is shown to be detrimental in maintaining an unbiased and democratic functioning of the committee.

Point four has passed allowing the RCMP to get a complete picture of a firearm owner by examining the persons entire lifetime to determine if  they should be granted a permit. This could essentially stop a potential criminal from obtaining a firearm LEGALLY but does nothing to prevent them from accessing illegal firearms to use it with criminal intent. Bill C-71 was stated as being nothing more than an attempt at making it look like something was done to stop illegal use and yet, all it did was accomplish absolutely nothing of value or contribute to solving the real problems of crime. You can find the article here and the government site explaining it here.

Point Six also passed with Bill C-71 stating that validity of a permit must be confirmed with RCMP prior to completing the transfer. This is delaying the time it takes for the transfer and continues to add backlog and suspicion of the government creating a backdoor registry of firearms owners and their firearms. Find the government outline on the website here.

Point Seven failed to be passed. I could not find evidence to the contrary and will update this point if evidence is brought forward.

Point Eight is buried in the funding for point number two, which we discussed as being awarded $51.5 million over 5 years to combat gun smuggling at ports of entry. Divide that by 129 border crossings and the amount accessible to add equipment to each site isn’t much. Works out to $396,124.03 per port over five years which is a paltry $79,224.80 per year to boost efforts. Not very effective. The government, however, supplied the funds to the Canada Border Services Agency to build an all-weather detector dog training facility, deploy more sniffer dog teams and expand X-ray technology at postal centres and air cargo facilities which means that most of the ports of entry don’t even see the money which is leaving most of them as vulnerabilities to be exploited by criminals. This also doesn’t even begin to touch the vulnerabilities of gun running on our Great Lakes.

Point Nine stands in theory. However, it can be noted that registering both PAL number and firearm serial numbers by businesses with the RCMP on new purchases can, and should be, considered a registry for all intents and purposes. So while the Liberals continue to insist this is not a registry, we’ll leave the stats in your hands to form your own opinion on the matter.

Point Ten was enacted and becomes law as of September 17th, 2019. There are a lot of requirements on this Treaty and they can be found here. The RCMP is responsible for enforcement and fines for breaking Treaty laws are changed from $25,000 for a max penalty to $250,000 for all offences punishable on summary conviction thanks to Bill C-47.

There were some successes in their quest for heavier gun control and yet the important areas, where we are having the greatest challenge in this country, went almost untouched. From the time the Liberals enacted the fund to combat gun smuggling and gang related firearm violence, it was found that the money hadn’t been distributed at all to the provinces and municipalities where it was supposed to go. If you continue to put stronger and stronger regulations on law-abiding firearm owners, without addressing the out of control gang problems, we will have an environment of complete mistrust in our law-makers. This has, and is, creating division instead of a sense of responsible community. Law abiding Canadian gun owners practise safety and responsibility. They keep up with their permit requirements and lawfully possess and shoot. Lets try taking the guns out of the hands of criminals by investing in community safety and putting the money into the hands of organizations that can actually make a difference. Safety is something that the Liberals have promoted about themselves for years, and it would be nice if they could follow their words up with action that transpires into a safer Canada, not just more hand-tying for law abiding Canadian gun owners.