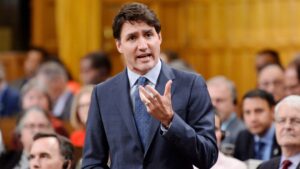 Last week, when Liberal Party Leader, Justin Trudeau, announced he was planning on banning assault style rifles, including the AR-15 style, it came on the heels of a series of three photos released of him having brown and blackface. This is such a silly tactic as at no time in the past have the Liberals planned or attempted to ban these specific firearms. Was this a tactic by the Liberals to save face amid controversy? Was this to try to sway back those supporters that showed outrage after the boy-blunders outing of racist behaviours?

It was purely a diversion tactic employed by the party to shift into damage control mode and to appease Liberals everywhere that he’s still all business and used a popular subject to try to boost his ratings. This was nothing more than a surety of who NOT to vote for.

Where the real problem lies…

According to this article written in June of this year, it was reported that Toronto Police Service had just hired 129 new recruits. However, with the increasing gun violence by criminals in the city, being down 1000 officers since 2006, there would be a significant increase as we just don’t have the body’s to be out there doing what needs to be done. No one has instituted a solution of hiring a special force to deal with the influx of guns on the street and as we looked at the Liberals a week ago, we can see that their funding for these things fell short. The article shows the complete breakdown in active duty officers:

“Clearly, there was recognition from the chief, finally, that the hiring freeze was not working and we did not have sufficient police officers.”

In 2018, 295 uniformed officers left the force, and this year the number will be about the same, McCormack said, which means Toronto Police Service is still playing “catch up.”

“This is a big problem and the chief still has to look at what we’re going to have to do, what the summer plan is when we’re experiencing the level of violence that we’re experiencing in this city and for public safety, so we need to address this issue.”

So where does that leave the most populated city in Canada with regard to protection and safety? Vulnerable. Completely and totally vulnerable. According to John Tory, the city doesn’t have information on where the guns used in crime are coming from. Which is an absolutely lie, as stated in a sitting of the City council on July 23, 2018, in which the Mayor was present and voted. A motion was put forth and stated the following:

a.  how Ottawa can support efforts to deter or reduce the ongoing wave of gun and gangs violence in Toronto;

b.  ways of stopping the free flow of illegal guns along the United States of America border into Canada; and

c.  how the allocated federal funding will assist the City in eradicating the level of gun violence in Toronto.

So why the shift in stance? Once, it was about the criminals and now, Mayor Tory has shifted this to a handgun issue and wants them all banned. No doubt to feed into the support of the Liberals to gain money that the city will use at will from the Provincial and Federal Governments.

Not one of these buffoons has showed us statistics with their proposed gun control points, that show AR-15’s have been used consistently in shooting attacks and pose a threat to society, any more than any other rifle could.

There have been four reported criminal uses of the firearm here in Canada since it’s inception during the 1970’s. Yes, it’s been here that long. You can find the stats here. Also keep in mind that the magazines for the AR 15 are limited to 5 rounds. Law abiding citizens understand these laws and abide by them. Criminals do not.

Assault style rifles, like the AR-15, are not automatic here in Canada and is no different (except in it’s physical style/design) than any other rifle that has a non-restricted classification (and use for hunting).

According to this article, “Indeed, the AR-15 was a legal hunting rifle in Canada until changes were made to firearms classifications in the 1990s.” So from the 1970’s until now, what has changed? Criminal activity has increased. Lowered screening for and an understanding of mental states of immigrants from war-torn countries (that has even been brought up in a sitting of Toronto City Council Section 19). Less funding for mental health initiatives country-wide. Less personnel and funding to address crime through police forces and most importantly, border security.

I’m curious if there has been an actual plan put in place to stop the illegal flow of firearms from the US to Canada. It’s been noted that seventy percent of the illegals guns confiscated have been traced back to the States. Straw purchasing and illegal firearm manufacturing rings have also been documented here in Canada. Let’s try going after the criminals and leave hard working, safe, Canadian firearm owners alone.

Where does all this leave us? It’s leaving us in a situation where our rights are being trampled. One person or party’s opinion does not represent those of the majority. They have never held a referendum on such a serious issue nor have they taken into consideration the long term effects: loss of jobs, creating division among Canadian citizens, creating an environment of criminality by prosecuting current legal firearm owners just because of a change in opinion/policy of one party, that has zero knowledge of the firearm world. It is absolutely deplorable for them to do this and equally bad on our part that we allow ignorance to dictate our rights.

Once your rights are taken away, you’ll never fully get them back. It’s been proven time and again that politicians are liars and change their views to serve their own personal agendas. So the big question is this: what will happen to the firearms that are surrendered? Will they be destroyed? Will they be purchased from us for a small amount and then re-sold to an underprivileged country to be used for war? Let’s face it…Liberal rhetoric from other countries has partaken in this exact action in the past and have been caught in it. Just ask Hillary. When Justin Trudeau used the phrase “assault style rifles”, his description was as weak as his argument and it showed his complete ignorance on a topic that he is unfamiliar with. He needs to leave these decisions to the grown ups and knowledgeable firearm owners and go back to playing in the sand box.